Skip to content
One of the Toyota PR guys appeared as we strolled up to the NS4 concept, and asked the crowd–what’s the number-one-selling car in America for the last gazillion years in a row? 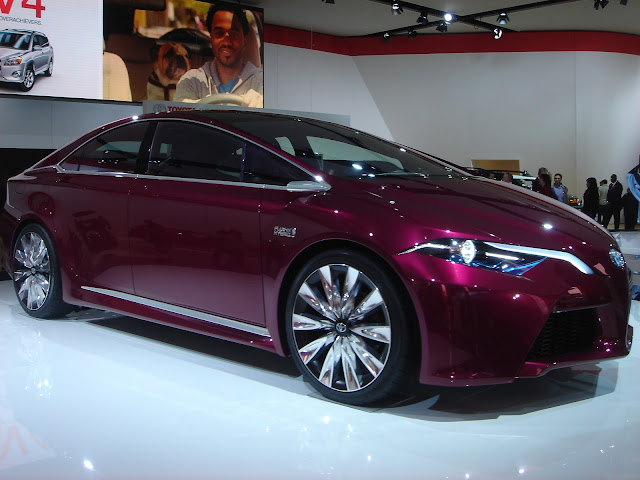 “The Camry,” I replied, a whole slew of emotions spewing forth in those three small syllables.  Chief among them: resignation that millions of Camry owners would continue to live out their bland lives driving bland cars that all of their bland friends drive too.  “Correct!” was the PR man’s gleeful cry, and he handed me a goofy, woolly knit Toyota cap with a baseball-type bill, and then proceeded to launch into the rest of his spiel.
Uh, thanks ‘yota, but you’ll have to do better than that to win me over.
For a start, they could make this NS4 thing a reality.  It certainly looks very nice.  As with all concept cars, however, technical details are few.  My gut reaction to this car was, “Ha!  They’ve realized the Prius is dog-ugly, and that they’ll need to make prettier hybrids in the future in order to perpetuate the perception that in a world of dirty, money-grubbing, steel-smelting automakers, they are the shining, eco-friendly city upon a hill.”
Over at Toyota’s premium brand Lexus, there sat two super-coupes, the LF-A and the new LF-LC. 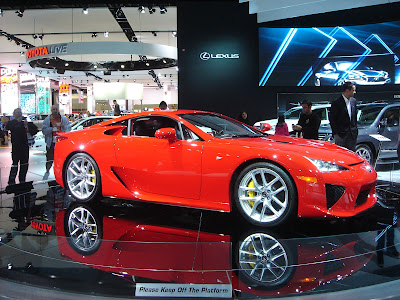 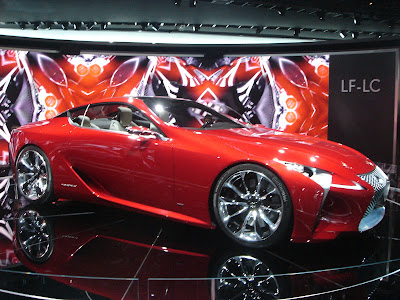 The LF-A has been around for a bit.  It’s an impressive bit of work, and Toyota certainly did not spare any expense in creating it.  For the money (starting at $375k!), however, there are many more exotic and/or better-performing vehicles available.
The LF-LC looks very similar from a proportional/dimensional standpoint.  The February 2012 Road & Track says that it “represents the start of a Lexus design revolution,” but looking at the above two photos, it must be pretty bloodless as revolutions go.  Take an LF-A, delete that silly scoop above and aft of the doors, make the headlights and front intakes flow together a bit more smoothly, pinch the grille so it looks like the new GS-series sedan, and slap a “hybrid” badge on it in place of the “lightning-fast-revving, fuel-guzzling V10” badge.  Voila!  Now we can say all of our future cars will look much less egg-shaped and boring!
I didn’t always speak so flippantly of Toyota.  My dad owned an ’87 Tercel five-speed that must’ve been the cheapest thing on the lot when he bought it.  It never, ever put a foot wrong.  He replaced it with a ’93 Corolla CE, also five-speed manual, when my sister and I got too big for the back of the Tercel.  The ’93 was the car I drove when I got my license, so I crashed it in fairly short order (always be careful turning left across traffic, kids), and it was replaced with a ’98 Corolla CE five-speed.  I banged that one up on more than one occasion (always, always go slow in the snow, kids), but it was still worth a decent amount by the time Dad turned the title over to me so I could sell it and use the proceeds toward my college-grad purchase (thanks!).
I liked those Corollas a lot, especially the ’98.  They were relatively cheap to insure and maintain, got good gas mileage, and were fun to drive because they had clutch pedals.  Wheels, tires, and all other wearable parts were cheap and available everywhere.

I understand the draw of all those advantages, and they seemed great at the time, but here’s the thing: once you drive something better, you wonder how you ever thought a Corolla was so great. And that’s my problem with these repeat Toyota buyers: they never try anything better.  That’s why the families in the Camry commercials have had a half-dozen Camrys in their lives and nothing else.  And therein lies the problem with Toyota–there is no incentive for them to make something better if their customers are not merely content but happy to keep paying them for something that isn’t necessarily better, just newer.  Thus, how could any Toyota be as good as something that does not need to please millions of unexciting people?

Off my soapbox.  Here’s your reward for reading my rant: 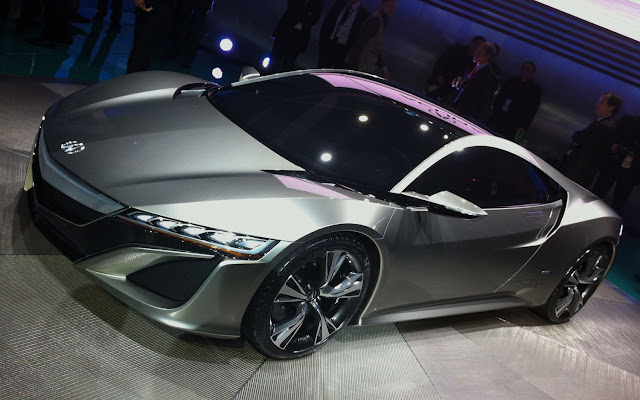 Over at Acura, three new models were in attendance: the next-gen RDX small sport utility, the all-new ILX small sedan, and the company’s latest stab at a new NSX halo car.  Pictured above, of course, is the NSX.  I’ve already shared my thoughts on the demise of the original NSX and what it indicated about the priorities at Honda/Acura, so I will not reiterate them here.  However, the whispers around this NSX concept are juicy ones: all about mid-enginedness (good), V6-ness (same as the original, good), and hybridness (if used to enhance performance and only then with minimal weight gain, good).  On top of all that, it looks very, very good as well.
We moved on to Fuji Heavy Industries, err, I mean, Subaru, the comparatively low-volume maker of delightfully quirky-looking all-wheel-drive cars.  Of course, the not-all-wheel-drive BRZ was getting the most attention there, but let’s have a look at something a bit more responsible: 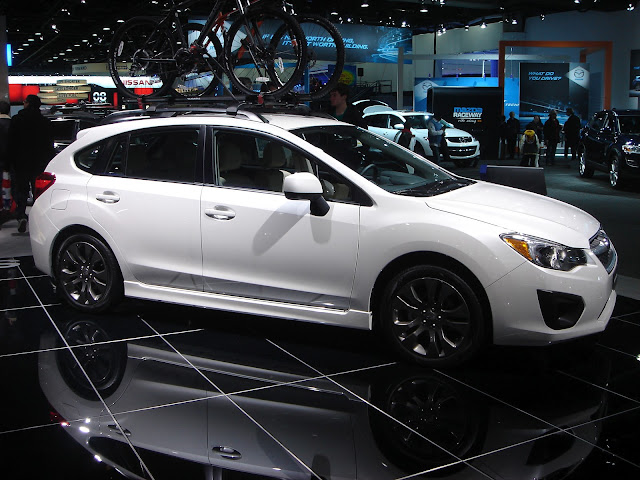 This is the new-look Impreza Sport, displayed with its standard mean-looking wheels and bike rack.  Auto-journo deity Ezra Dyer drove a similar car to this one for Automobile Magazine in October 2011, and said two things worthy of note: “this car absolutely owns the title for ‘chassis that could handle significantly more horsepower'” and “this thing is going to make a hell of a WRX.”
Perhaps I wasn’t phrasing the question the right way, but when I asked the Subaru folk when the new Impreza would get the WRX treatment, they said it would not.  Instead, the Impreza and the WRX/STI are going to go their separate ways as totally unrelated, independent cars, and their timelines as far as updates and production will be wholly different.  Please, someone, say it isn’t so.  All this Impreza needs is to not have leather and a clutch pedal be mutually exclusive, plus some more power and requisite suspension/brake tweaks, and I’m sold!
Mazda had nothing new–the CX-5 was present but still not open for clambering around in.  To fill the void, they just brought a bunch of race cars.  Oh, and a Miata that, as the Miata has always done, was trying its best to emulate a Porsche Boxster–in particular the Boxster Spyder this time. 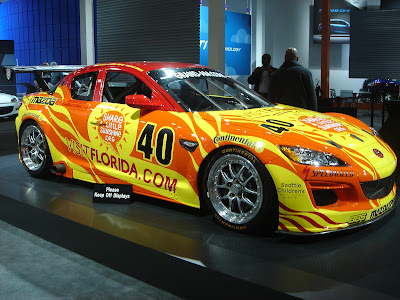 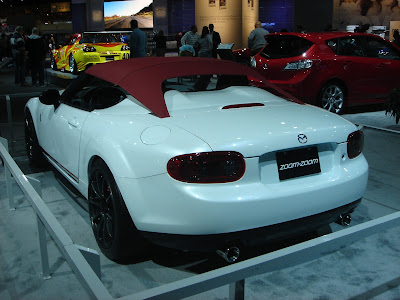 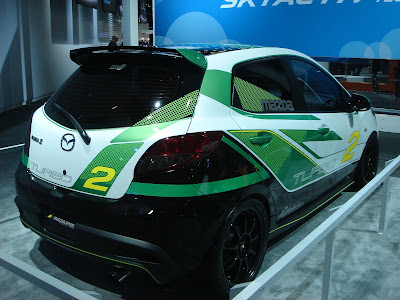 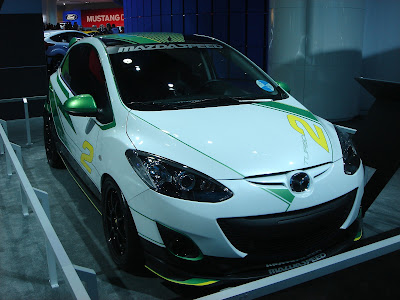 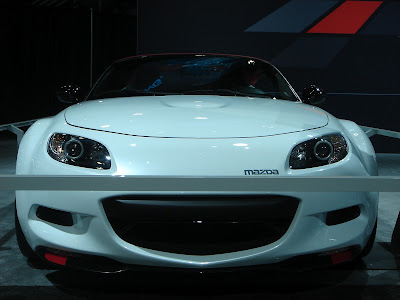 Next post: we wrap up NAIAS coverage with GM, Chrysler, and a hot Fiat girl (not quite as hot as the one from the Super Bowl commerical, though).

One thought on “DEEEEE-TROIT! Part 4: Nippon”