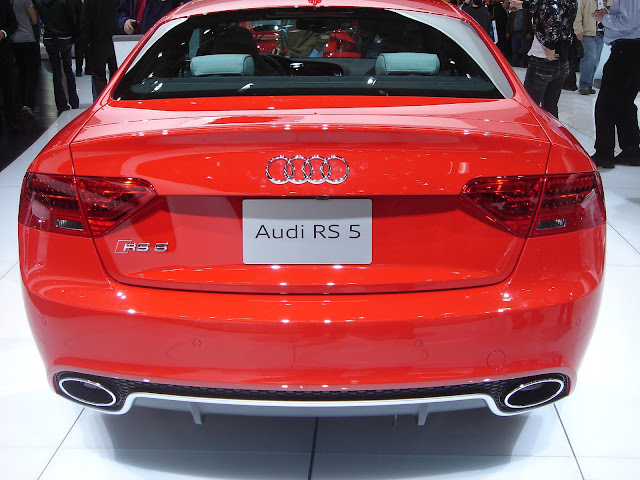 Nothing grabs your attention quite like a fire-engine-red RS5, with its gaping maw threatening to inhale everything in a fifty-foot arc in front of it.  This was the first time I had seen the RS5 at a show, though it has been available for some time.  It was worth the wait.

Audi also brought out the S6… 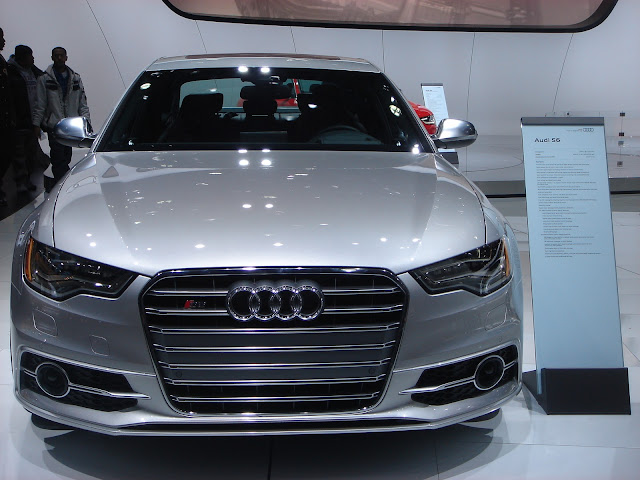 …and for the common folk, the subtly but quite attractively facelifted 2013 A4 rotated quietly on a turntable.  Additionally, the A4’s fraternal twin, the 2013 Allroad, made its first auto show appearance. 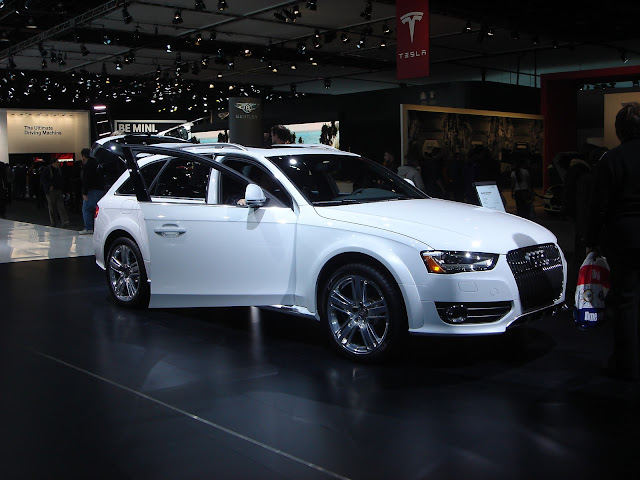 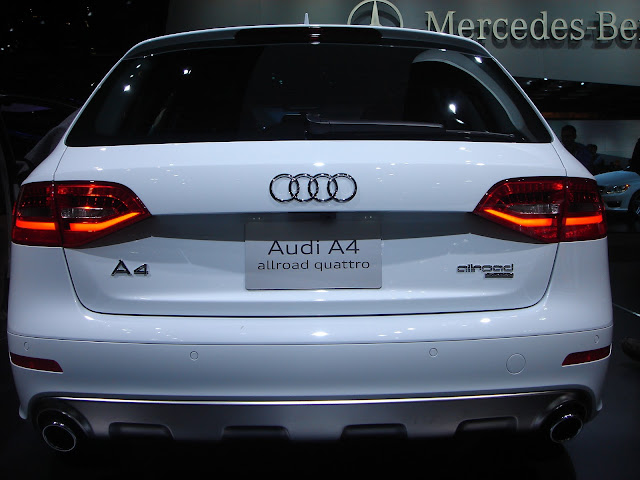 Enthusiasts love the Allroad and clamored for its return to North America after it retreated to a Continent-only status after model year 2005.  Why?  Because it was a car that really could do just about anything you asked of it.  Cruise long distances in great comfort.  Raise the air suspension up and go off-road.  Tow.  Carry lots of gear and/or a large dog.  Even put on a somewhat respectable show on a racetrack.

However, I’m a little wary of this new Allroad because it’s slightly smaller than its predecessor (A4 rather than A6 platform) and is available ONLY with the ubiquitous VW 2.0T–back in the day, you could get a 4.2L V8 in these things.  The smaller size and lesser power rating together mean that this car isn’t really as capable as the old one.

Why is this the case?  Well, I’m certain Audi did not want to see a niche-market wagon snaking sales out from under the premium cash-cow Q5s and Q7s.  Remember too that the VW Auto Group now wants to be the #1 automaker in the world, and if that means sacrificing a little of some brands’ old legends in the name of higher sales numbers, so be it.  So while I’m happy to see the Allroad return, I’m disappointed that it does so in something of an underwhelming fashion.  Perhaps in the future the legend will truly return in the form of a more powerful engine on the option sheet.

Meanwhile, over at VW… 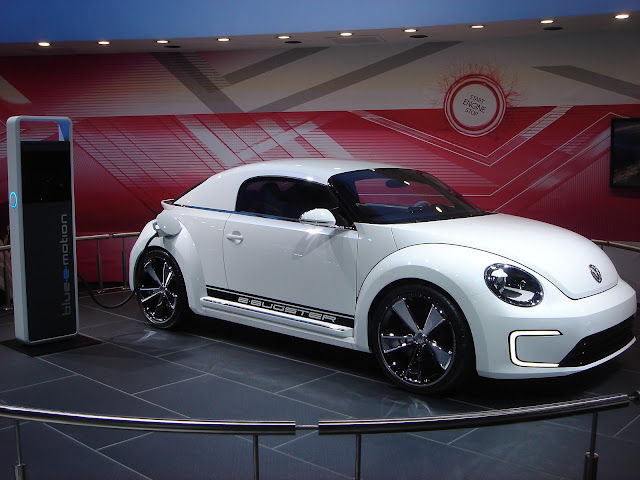 …the center of attention (with not only its dais, but attendant DJ both doing some spinning) was this, the E-Bugster, a chopped/raked-windshield, removable hardtop, two-seat-only all-electric version of the 2012 Beetle.  VW was quiet on whether this vehicle would see production.  On one hand, I can see this really appealing to the hipster crowd.  On the other, does any electric-only car limited to a hundred-mile range make sense at all?

The VW that SHOULD have been the center of attention was this: 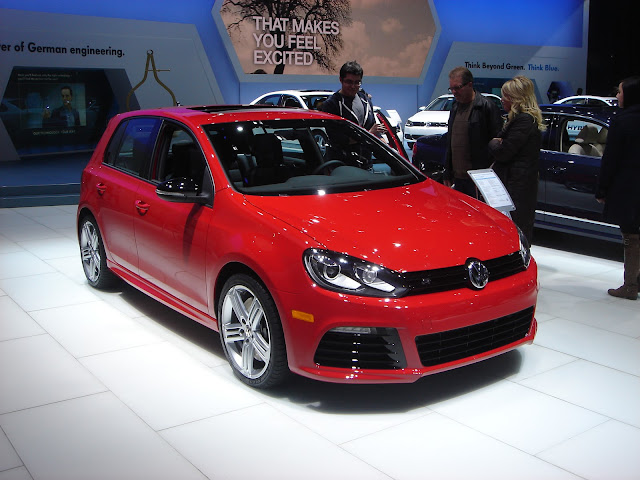 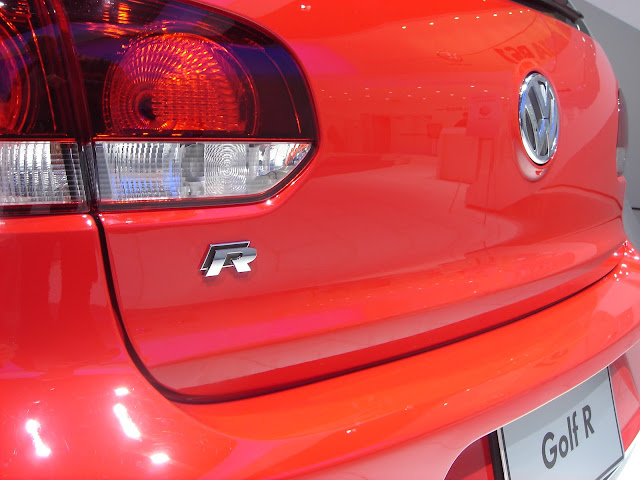 The six-speed stick-only, 256hp/243lb-ft two-liter direct-injected turbo Golf R.  The Q-est of the Q-ships.  Woe to those who think this is an economy car, easily passable off the line or up the on-ramp.

The best thing about the Golf R, though, is simply that VW builds and sells it.  This is not an inexpensive automobile, and for the kind of money Volkswagen seeks for the right of ownership, most people will be buying some kind of gargantuan milquetoast crossover.  But there is a rabid base of R-series fans, and VW made this car to please them, #1 automaker aspirations notwithstanding.  Faced with the Golf R, I must forgive the Allroad.

Moving on, I was grateful for the chance to investigate the interior of the Motor Trend Car of the Year, the new Passat.  I must say, that while it is a handsome car both inside and out, it is handsome in an entirely inoffensive, uninspiring, passionless way.  I am certain that its commuting capabilities are admirable, but I don’t want one.  Or not want one.  Honestly, on a scale of negative one billion to one billion, the Passat scores exactly zero with me. Which probably means they’re selling like hotcakes.

Lastly, over at the automaker for which there is no substitute: 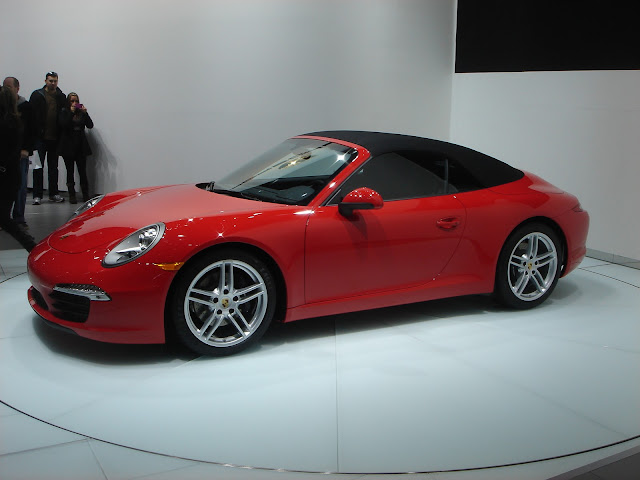 …the 991 Cabriolet sat in all its splendor.  Mine would not be red, but still, a beautiful thing to behold.

Sadly, the 981 Boxster was not available for public viewing in Detroit.  And interestingly, the 991 shared square footage with the 997 models that it has not yet replaced (Turbo and GT-series).  For the first time, however, a 991 Carrera S was left with door yawning open, inviting any and all to have a seat behind the wheel.  I was only too happy to oblige.

I have to say that I’m not a fan of the rising center console nor the electronic e-brake.  However, I joyously report that the LATCH system has finally appeared in the back seat of a 911!  Even ignoring that long-overdue change, however, the interior space in its entirety is a quantum step up from the 996 series, and a still-noticeable step up from the 997.