Skip to content
It’s been far too long a layoff from writing here.  A big move from fantastic Las Vegas, NV to a slightly less fantastic spot in New Mexico is to blame.  Still, the automotive world never stopped turning during our relocation, and I’ve done my absolute best to keep up with it even though I haven’t had time to put fingers to keyboard.The North American International Auto Show went public in Detroit from January 13-22.  I noticed our move would take place right about that same time, so I was only too happy to ship the kids off to their grandparents’ in Michigan during actual packing and shipping so that, oh darn, we’d have to go pick them up while the show was live.  It would be my first trip-ever to Detroit and the NAIAS.

This is a video I shot of myself arriving.

Okay, that isn’t true.  But Chrysler is very cool, and I did grab this picture on the way in:

We’ll come back to Chrysler in a bit.

The entirety of the show fit into one gigantic hall, which was somewhat strange to me.  I had grown accustomed to shows like Philly and LA, where the show is split into four or five different halls.  The Cobo Center in Detroit brought every exhibitor together in one room, and I think the benefits were tangibly obvious–it seemed like a lot of industry people were wandering from their own displays and interacting with their peers and competitors.  The level of expertise I overheard in passerby conversation seemed noticeably higher than I had noted at any other auto show.

We strolled in through the first door we spotted and found Ford on our right, Honda on our left.  Honda’s hottest draw was the new CR-V.  Yawn.  We went right.  The blue-bathed Ford display was festooned right up front with at least four examples of the 2013 Fusion.  Autoweek had already named it “Best In Show.”  I’m not sure why.  The “Superman” grille treatment and derivative Mondeo side creases do not endear it to me–as far as I’m concerned, the midcycle refresh (years 2010-2012) of the original Fusion made for a much better/Ford-looking car than this new one.

One design change that Ford did well on, though, was the refresh of the Flex.  Taking the best of the original Titanium package’s exterior treatments (F L E X across the hood lip), adding a few new flourishes here and there, and bringing the MyFord Touch from the new Explorer into the Flex’s instrument panel were all excellent moves.  The Flex remains a fantastic, underappreciated, all-weather, high-speed, high-comfort people-mover for those who know that a conventional SUV is unnecessary about 99% of the time.

In case you hadn’t heard, Ford has nixed the Mercury brand and is spending money hand over fist to revitalize Lincoln, following in the footsteps of many other automakers (Nissan/Infiniti, Toyota/Lexus) who produce two brands: one for the masses, and one for the elitists that will pay more for essentially the same thing.

Now, at present, Lincoln is fairly awful.  The cars are clearly rebadged Ford models, and what little unique styling they have is in general not very good. 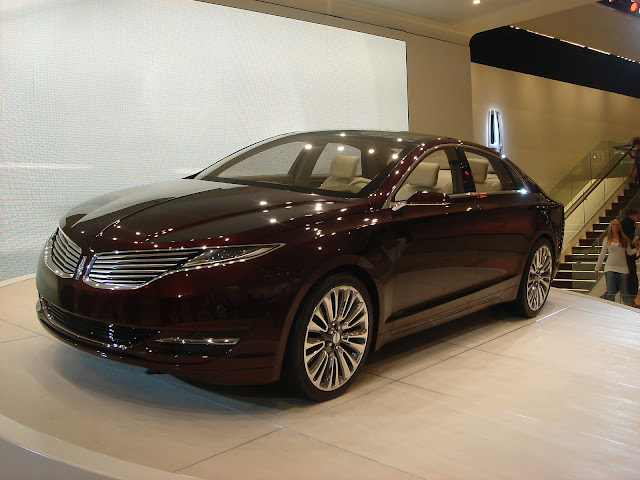 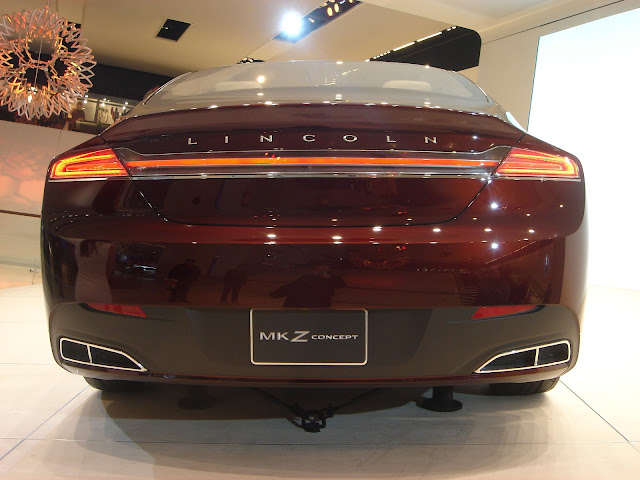 This MKZ concept, however, was gorgeous.  It struck me as visually akin to a Jaguar XJ, which is similarly gorgeous.  If Ford can get this on the road for around the mid-$60k range (undercutting the European luxury makers) without straying too far from the concept’s styling, watch out.

The SVT Raptor that lifts up off of its frame was in attendance (you’ve seen it on this blog before), drawing a crowd as it always does.

We moved on from Ford not too long thereafter.  Next time, on The Flat Six: ze Germanss!

One thought on “DEEEEE-TROIT! Part 1: Ford”