Skip to content
Now, the town of Benton is where one finds the eastern end of CA-120, the magical mountain road that twists, rocks, and rolls from there through Yosemite National Park, and nearly to Oakland if you stick with it.  It was this view of CA-120 from Google Maps that was irresistible to me. 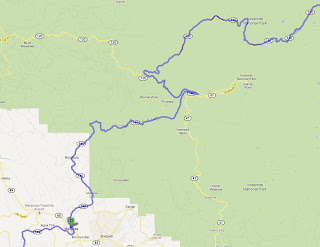 No boring million-lane mindless highway was taking us to Monterey, no sir.

We found that to be especially true just after getting on CA-120.  Outside of town, clawing our way up into the mountains, we passed a sign that said DIPS – NEXT 5 MILES, and I thought (…can’t…stop…myself…), “How hard can it be?”

By “dips” they must have meant 20-foot swells that brought back memories of the time I went halibut fishing in Alaska.  You would disappear into the trough of one of these “dips” and lose sight of the sun.  Then you’d crest the next rise and try to breathe before you plummeted down again.  You could see where vehicles driven too fast had nastily bottomed out, their crushed bumpers and undercarriages scarring the pavement.  It was absolute agony for my poor wife, who can get motion sickness pretty easily.  To make matters worse, the road surface itself was in awful shape, with teeth-rattling seams almost uniformly laid across its width.  It was an indescribable relief to get those five miles behind us.  Look at CA-120 just west of Benton on Google Earth (N 37 54′ 00″, W 118 39′ 45″ or thereabouts), and you’ll see that the dips are actually caused by the road cutting too near the foot of the troughs of the mountain range that lies off to the west.

The road had improved vastly now that it was no longer tangling with the forces of geology, and the scenery around us at elevation 6500′-plus turned otherworldly.  There were trees so blindingly orange that groves of them clustered around a peak made a mountain appear as if a stunning sunset was taking place at midday.  Perhaps the best part about the view was that the only ones to share it with me were my wife and little ones–absolutely no other cars on the road.  Sure beats sitting in traffic in Primm waiting for the outlet shoppers.  Then you crest a pine-studded hill and wow, there’s Mono Lake.  The remainder of the first leg of the trip–Las Vegas to Lee Vining–goes by in a flash.  We’re halfway to our hotel, the sun is shining, it’s lunch and gas time…all is right with the world.  And we haven’t even gotten into Yosemite yet.