Skip to content
This afternoon, after #1 woke up from his nap, his Mommy started asking him what he’d like to do.  I was downstairs or something, so I missed out on exactly how he came up with “go to the Volkswagen store.”  Not that I’m going to complain or anything.We headed down that way, passing a bunch of other dealerships en route.  He showed little interest in those, but when we crested the hill and the “VW” logo became visible on the downslope, he yelled, “THERE’S the Volkswagen store!”  I guess he wasn’t kidding about wanting to go.

We took one lap around the lot, then parked the ol’ family-hauler and got the boys out.  #1 wanted to go straight into the showroom.  As we walked toward it, he noticed an ’02-’04 996 C4S under the service overhang.  “Just like Daddy’s!  But Daddy’s isn’t red,” was his comment.  That’s my boy.  It WAS quite red, to the point of having black wheels with red rims and Porsche-badged center caps.  I bet those were expensive.  The plate was a custom job: GOTMINE.  Yeah, I do too, Boss, but I’m not shouting about it.  Have a little class.  Oh, and I didn’t see you in Monterey for Rennsport Reunion IV–sure you didn’t buy it for the badge?  At least it wasn’t a Tiptronic.

Anyway, we got into the showroom and breezed right past most of the VW fare, though #1 did like the idea of a Routan (primarily, I think, because it was all opened up and looked inviting to climb around in).  I told him we could just get the same thing for less money at the Chrysler store.  He also said the sky-blue-on-ivory Eos was “pretty,” and I chuckled, because the girls that pay the obscene amount they charge for it must really think so too.

The last car we got to in the showroom, due to our counterclockwise circuit, was the red-on-black Sportwagen TDI.  And I gotta say, there’s a lot to love about this car.  The panoramic sunroof with electric shade is very cool and gives the illusion of a lot more interior space.  There really IS a ton of interior space when you fold the rear seats down (almost flat but not quite) and open up all 66.9 cubic feet.  The multi-link rear suspension is certainly an improvement over the standard torsion bar in a Jetta sedan.  And how many wagons can you get with a) a six-speed stick getting 30/42 EPA MPG or b) a six-speed dual-clutch auto getting 30/42 EPA MPG?  Can’t make a bad transmission choice here.  One more thing: 236 lb-ft of torque.  That is all.

Downsides: not many.  I’m not sure if our 70-lb Labrador could sit up straight in the rear cargo area.  She might be stuck lying down for our travels, which is a shame because she loves staring out the rear glass, “watching puppy TV,” we like to say.  The exterior design is definitely understated, with lots of front/rear overhang and not enough of a crease down the length of the thing to keep it from looking blimpy.  The signature diesel clatter is definitely noticeable from outside the car, but why are people supposedly afraid of this?  I don’t think anyone age 30 or below has any memory of a smoky diesel passenger car.  Thus, there is no stigma to battle.  Heck, all I think when I see the letters “T-D-I” is “wins the 24 Hours of Le Mans.”

You gotta love the price.  Fully tricked out with TDI, dual-clutch auto, nav, sunroof, and all the electronic gizmos, you still squeak in under $30k after the destination charge.  Get the six-speed stick and you stay well away from $30k.  In either case, you’re significantly below the average price for a bloated, unnecessary, high-CG, expensive-tire, subpar-gas-mileage crossover, and way more fun to drive.  On paper, this thing is a winner.  Now I just gotta drive one… 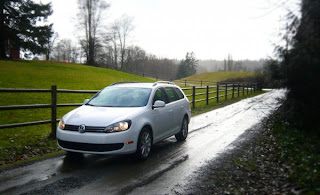 (this picture courtesy the R&T “Impressions” at http://www.roadandtrack.com/tests/impressions/2010-volkswagen-jetta-sportwagen-tdi)